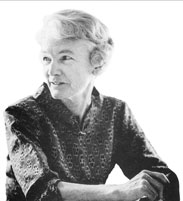 In the early 1920s a few courageous women, and even fewer men, set up five societies to promote and provide family planning. By 1930 these societies were organised into the National Birth Control Council (NBCC) and the first meeting of the NBCC was held in the drawing room of Gertrude Mary Denman, Baroness Denman, a redoubtable woman with wealth, influence, and who had a keen interest in women’s suffrage and welfare. Baroness Denman was an unfailingly generous supporter of the family planning movement and chose a young woman, Margaret Pyke, as the NBCC’s first secretary. Initially, Margaret Pyke was the NBCC’s only employee, but the NBCC grew significantly. It was renamed the National Birth Control Association in 1931 and was renamed once again in 1939 as the Family Planning Association. When Baroness Denman died in 1954, Margaret Pyke was her obvious successor as chair of the Family Planning Association, which had developed a network of clinics and had achieved a great deal to ensure that family planning had become more respectable in society.

In 1955 when the minister of health, Iain Macleod, at Margaret’s instigation (helped by Lady Monckton), paid an official visit to the FPA national office and one of its clinics, it helped change the climate and from then on publicity for birth control was widespread and respectable. Margaret’s contribution to the family planning movement was considerable, not only in Britain; she was also involved in the foundation of the International Planned Parenthood Federation. Margaret was appointed OBE in 1963, which at that time and for her particular kind of work was a triumph of official recognition, given openly and specifically for her work in family planning. She lived at 23 Kingston House South near Hyde Park.

Foundation of the Margaret Pyke Trust

With the Margaret Pyke Centre safely in NHS hands, we moved our attention to training and research. We became, and remain, the UK’s leading provider of sexual and reproductive health training for healthcare professionals, with input still provided by CNWL. You can read more about our current training programmes for healthcare professionals here and more about our research activities here.

Moving to the future

Throughout our existence we have always been at the forefront of developments in family planning. In more recent times, this has been demonstrated by the continued growth of our international programme, the Population & Sustainability Network, which developed out of the preparations for the World Summit on Sustainable Development held in Johannesburg in 2002. The Population & Sustainability Network was formally launched as a Partnership for Sustainable Development under the UN Commission for Sustainable Development at the United Nations in New York, in April 2004. Through our Population & Sustainability Network we work internationally to promote reproductive rights for sustainable development. In 2016 we launched an additional international programme, matching the training skills of specialist sexual and reproductive health medical professionals with identified clinical training needs in the developing world. These volunteers, the Margaret Pyke Volunteers, bring together our UK and international work in a unique way and ensure that the legacy of one of the UK’s most important family planning pioneers remains alive and well.

Partly in recognition of our increasing international focus, we formally changed our name to the Margaret Pyke Trust, with the Population & Sustainability Network in June 2016.